skip to main | skip to sidebar

HUMOR INSIDE and OUTSIDE the HALLOWED HALLS 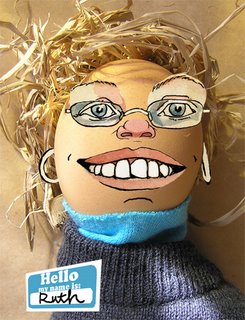 This morning I happened on Dumbfounded.

Tight for time and not in the loop of insider references, I nevertheless found the following item to be a gem that brought gales of laughter to John and me.

Apparently a CTS outsider is trying to get some juicy gossip from Jennifer, a CTS insider. The individual writes:

But don’t even try to get me to “extract” any info out of her. I’ve tried and all she says about the woman is that she seemed a little…. oh hi honey, say what are you doing with that frying pan behind your back.

That's WAY too good! If you ever read in the GR PRESS that dear John has been downed by a frying pan, you heard it here first!

AND, SOME SAD NEWS FOR THE GRANDKIDS (on same site)

BOOTED FOR SPIRITUAL DEFICIENCIES? (above site)

RubeRad faulted me for not giving voice to the matter of my spiritual disciplines, quoting me as saying “except where it comes up naturally in class or in conversation I don’t typically speak of it.” "Maybe that’s why the seminary is booting her," he mused.

Well, RubeRad has a point. I’m less tight-lipped about my husband, however. Indeed, this morning I walked in on him kneeling naked in front of the bathtub (he says washing his hair; I say it doesn’t take a tub to wash his few thinning hairs!). So does that "prayer" count for me, RR? (Didn’t one of you say something about God’s order of male headship covering for a wife’s deficiencies?) Alas, I could only wish I would have seen dear John kneeling before the throne.

IS SHE A CHRISTIAN OR NOT? (also from aforesaid blog)

She doesn’t quite fit the mold of a seminary professor. Maybe that’s why the seminary is booting her. . . . Her answer to a charge of a lack of godliness seemed to me to be exactly the kind of answer that a liberal Christian would give to a charge of unorthodoxy. . . . I am not attempting to judge whether she is a Christian or not. But the tone of that one statement. . . implies to me that she might be the type of ‘theologian’ who . . . rotted Princeton Theological Seminary from its original status as a premier institution of Reformed Theology to a theological joke: a secular academic institution devoid of spirituality.

So now we have another reason why I was given the boot! If a Christian at all, I'm of the type that "rotted Princeton." This is a first, folks. I've never before been put in the company, for good or for ill, of Princeton theologians. (As to Princeton being a "theological joke . . . devoid of spirituality, Hmmmm. My dearest friend, a Princeton professor, now deceased, gave me spiritual sustenance during a dark time a decade ago. And my friend, Darrell Guder, current Dean of Academic Affairs, is anything but a "theolological joke . . . devoid of spirituality.")

Still another reason for getting the boot. I'm a feminist. I'm connected with CBE. I don't fit the mold.

"I saw that she has a link to the Christians for Biblical Equality webpage."

“she doesn’t fit the mold”. Eg., riding a bicycle umpteen miles with her husband, redoing the house boat they moved to, etc. . . . I must admit there is a pretty clear picture that she is a feminist, but that does’t make her ungodly, in my judgement. [My feminist biking kicked in big-time today, this cold October 14--temperature in the 40s (-14 windchill?).]

Bruce comes to the rescue: "Hiking, swimming, painting, plumbing, yardwork, washing all the cars, general handyman work . . . does not make one a feminist. . . . What makes one a feminist is flipping over/tossing aside the order of God’s creation re gender."

O me, O my. We've got a long way to go before we see the light at the end of the tunnel.
Posted by Ruth A. Tucker at 4:49 AM No comments:

Ruth A. Tucker
I'm a teacher, writer, conference speaker, gardener, and blogger. Husband John Worst is Professor of Music emeritus at Calvin College. We love the outdoors and living on the Grand River, and we delight in our grandkids, Kayla, Mitchell, Ashley, and Zachary.

I began teaching at Calvin Theological Seminary in 2000--the first full-time woman professor in the school's 125-year history. In 2003, less than 3 months after Cornelius Plantinga, Jr. was installed as the new president, I was, without warning, removed from tenure track and given a terminal appointment. I have repeatedly asked that all the evidence be opened only to be blocked by a dishonest cover-up. When independent mediators were retained by the seminary board in 2005, they called for "retroactive pay to 2003," among other things. That report was buried. I finished my second terminal appointment on August 31, 2006, and shortly thereafter published my story at www.ruthtucker.net.